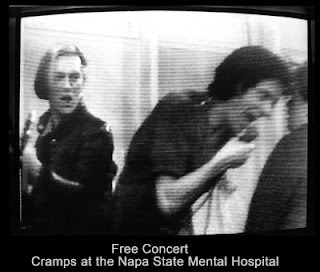 This is our first movie post. In much the same way that I still refer to all recorded music as ‘records' I am still inclined to refer to any moving picture media as ‘a film’. I may post the 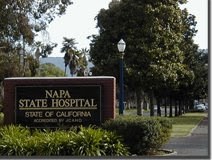 occasional film, but it won’t happen that often.
The other day I was leafing through The British Journal of Psychiatry and I came across an article on music therapy for in-patients with schizophrenia
(2006 189: 405-409. doi: 10.1192/bjp.bp.105.015073 if you’re interested) that reminded me of this film.
Whatever you want to call that genre of raw B- movie horror horror punk that has its roots in early rockabilly and still flourishes to this day, The Cramps bestrode it like a 60 foot woman. How about Rock n Roll?
Napa State Hospital, California a 500-bed, four-story, Gothic-style asylum opened in 1875, when the institution in San Francisco became overcrowded.
In June 1978 The Cramps gave a free concert for patients at the Napa State Hospital that was recorded on a Sony Portapak by the San Francisco collective Target Video

In his treatise Meanings of the Intellect al-Farabi(872–950), dealt with music therapy, where he discussed the therapeutic effects of music on the soul.Robert Burton wrote in the 17th century in his classic work,The Anatomy of Melancholy, that music and dance were critical in treating mental illness, especially melancholia.So how about this?