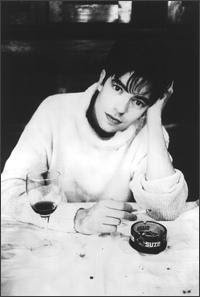 We had this mate who kept suggesting all these names …Echo and the Bunnymen was one of them. I thought it was just as stupid as the rest. -Will Sergeant.
Talk about transference. For a while I couldn’t take to the Bunnymen because there was this kid that I disliked who looked just like Ian McCulloch. Somewhere in my mind the idea formed that Mac must , therefore, be just as obnoxious as the kid I disliked. Eventually I even began to think that my dislike of the kid might have stemmed from his resemblance to McCulloch…
The kid moved away and I couldn’t just forget him because of McCulloch.
But just like everybody else I knew I bought Crocodiles and Porcupine and tutted at the bizarre miming of The Cutter on TOTP. This was, after all, a real group.
Then I started hanging out with a chap who was a huge fan of the Bunnymen (he always wore a pyjama jacket, never a shirt) he played nothing but Bunnymen, at home, in the car, in work. Slowly my prejudices shrank.
Funnily enough when the detested McCulloch lookalike moved back into the area he actually turned out to be quite a nice bloke.


Echo and the Bunnymen were managed by the great Bill Drummond, who went on to found the The Kopyright Liberation Foundation - and who once sent the band on a tour of obscure and seemingly random locations. Drummond however, later pointed out that if the locations were traced on a map in order then the resultant join the dots would form a pair of rabbit ears...
Line up:
Ian Mcculloch (Guitar, Vocals)
Will Sergeant (Guitar)
Les Pattinson (Bass)
Dave Balfe (Keyboards, Percussion, Drum Machine)
Posted by Walker