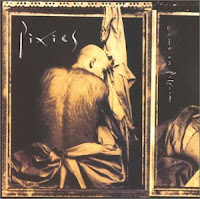 Come on pilgrim, you know He loves you…Christian rock singer Larry Norman.
Come On Pilgrim was the Pixies’ debut, released on the 4AD label in September 1987.
In 1997 Gary Smith, who produced the EP commented on the band's influence on alternative rock and their legacy :
I've heard it said about The Velvet Underground that while not a lot of people bought their albums, everyone who did started a band. I think this is largely true about the Pixies as well. ... It became a kind of new pop formula and, within a short while, "Smells Like Teen Spirit" was charging up the charts and even the members of Nirvana said later that it sounded for all the world like a Pixies song.
Kurt Cobain:
I was trying to write the ultimate pop song. I was basically trying to rip off the Pixies. I have to admit it ... When I heard the Pixies for the first time, I connected with that band so heavily I should have been in that band - or at least in a Pixies cover band. We used their sense of dynamics, being soft and quiet and then loud and hard.
The songs, with their dark references to incest, sex, religion and mutilation read like the footnotes to a David Lynch text. The music can be mellow at times but is threaded with seismic and breathtaking burts of spleen.
Line up:
• Black Francis – vocals, guitars
• David Lovering – drums
• Mrs. John Murphy* – bass, vocals
• Joey Santiago – lead guitars
*Mrs. John Murphy is Kim Deal