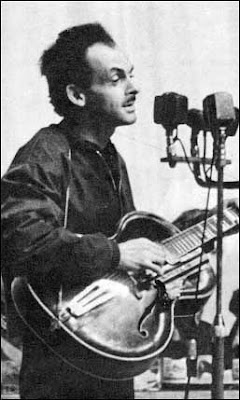 The composers hated me. The singers detested me. The guitarists were terrified by me. -- Bulat Shalvovich Okudzhava.

I pieced together this little compilation of six songs from my gleanings.
The term bard came to be used in the Soviet Union in the early 1960’s to refer to singer-songwriters whose work was not favoured by the establishment. It’s all about the lyrics; these are poems set to music, which consisted of simple chord progressions. But to western ears it’s a gorgeously mournful sound. The genre was commerce-free in nature; songs were written to be sung and not to be sold.

Bulat Shalvovich Okudzhava served in the Red Army in The Great Patriotic War. His father was accused of espionage and executed, and his mother served 18 yrs in the Gulag.
After the war Bulat Shalvovich worked as a teacher and a magazine editor. He came to music late, in his thirties.
Bulat Shalvovich had no formal training in music, and only employed a few chords , but he possessed an exceptional melodic gift, and the intelligent lyrics of his songs blended perfectly with his music and his voice. His unofficial recordings were widely copied (as so-called magnitizdat) and spread across the USSR where other young people picked up guitars and started singing the songs for themselves. In 1969, his lyrics appeared in the classic Soviet film White Sun of the Desert.
Bulat Shalvovich, however, regarded himself primarily as a poet and claimed that his musical recordings were insignificant. During the 1980s, he also published a great deal of prose (his novel The Show is Over won him the Russian Booker Prize in 1994).

Play the guitar? Try this…
The traditional Russian guitar has seven strings. These guitars are typically tuned to an Open G chord as follows: DBGDBGD
However, it is common practice for players of Russian bard music is to retune six string guitars using variations of the seven string tuning, such as: G'-B-D-g-b-d' (no bass string, also known as "Dobro open G"), D'-B-D-g-b-d' (no low G), D'-G'-D-g-b-d' (no low B, the standard six string 'open G tuning'), D'-G'-B-g-b-d' (no middle D, used by Bulat Okudzhava in his latter years when he adopted a six string).