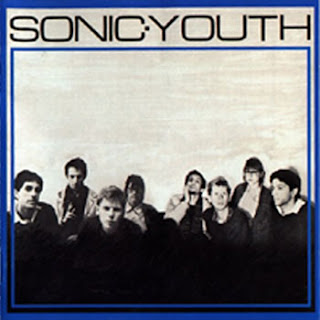 This is Sonic Youth’s self titled debut from 1982.
Whilst this is the only Sonic Youth release in which the guitars predominantly use standard tuning and there is very little atonality or distortion, it still gives us a taste of the startling achievements of their later work. As critic Stephen Thomas Erlewine wrote: Sonic Youth redefined what rock guitar could do, referring to their employment of a wide variety of tunings,and the preparation of their instruments in order to alter the timbre.
Whilst the band drew on the energy of hardcore punk and earlier bands such as the Stooges , they were also influenced by avant garde composers such as Henry Cowell and John Cage.
You could write a thesis on the subtleties and complexity of Sonic Youth’s sound and its origins. Or you could just turn it up and ride the expressway to your skull.