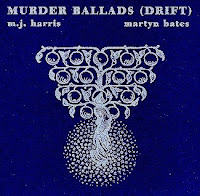 There is no silence – there never has been any silence … Mick Harris.
Mick Harris started out in the 1980s as a drummer with pioneering grindcore band Napalm Death.Since the mid-1990s, Harris has worked primarily in electronic and ambient music,his main projects being Scorn and Lull.
Martyn Bates formed eclectic experimental duo Eyeless in Gaza in 1980.
Both men have worked extensively in a range of musical genres.
Murder Ballads (Drift) is a marriage of isolationist ambience with the murder ballad form. The LP comprises long, (fourteen minutes plus) desolate and beautiful pieces. A second volume Passages followed in 1996, with a third volume Incest Songs released in June 1998, completing the work. The trilogy was later released as a box set (if the response to this is good, i.e., one download, I’ll post the others in due course).
These are haunting pieces, on which Martyn Bates sings tenderly against Harris’ backdrop of mesmeric drones.
Posted by Walker