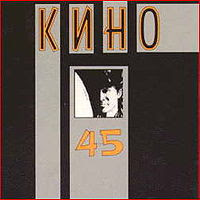 “Цой жив!” (Tsoi lives!- still painted on walls throughout the former Soviet Union).
КИНО (pronounced key-no, and meaning cinema) was the most prominent rock group in the Soviet Union.
Formed in Leningrad in 1981 they recorded this, their debut, in 1982. In the Soviet Union rock music was very much an underground affair, and the LP was circulated via unofficial channels. The album derives its title from its running time; 45 minutes, or, conveniently, one side of a C90 cassette.
With the beginning of the Perestroika era rock music became more ‘open’, although КИНО still found themselves on the margins of the accepted scene.
In 1988 however they released an album (Blood Group) which, along with the appearance of frontman Viktor Tsoi in a movie (Needle) raised КИНО to the pinnacle of popularity, and they toured widely, both within the USSR and abroad.
Viktor Tsoi was killed in a car crash on 15th August, 1990. He was 28 years old. 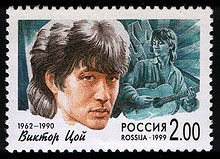