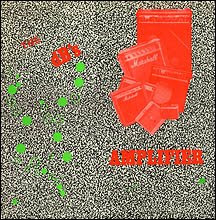 The dB's are another example of a band whose influence far outreached their commercial success, and they represented the prototype for many of the USA’s independent acts of the eighties, with their jangly sound and studious manner.
Though formed in New York, the band members all came from Winston-Salem, North Carolina.
They released their first album,Stands for Decibels, in 1981, to critical acclaim but negligible sales. The LP featured precise arrangements and highly accomplished playing. The album Amplifier features tracks culled from their first two records and is not a part of The dB’s ‘official’ discography.
Line up:
Chris Stamey- guitar, vocals
Peter Holsapple- guitar, vocals
Gene Holder- bass guitar
Will Rigby- drums

Peter Holsapple went on to work with REM, supplementing their line up for live performances, and from 1989 to 1991 was frequently described as the fifth member of R.E.M, before disputes over songwriting credits led to a rift.