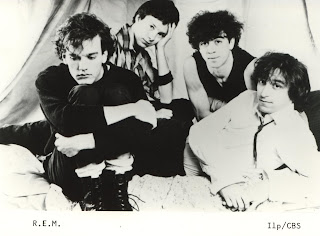 Sooner or later I had to post something by R.E.M.
Brad said that he was originally from Scranton, PA. His dad had inherited some farm and they’d moved to the mid west. Brad hated it there. He actually preferred to be here in Wales. I suppose it must be cool to be considered exotic. On one arm he had an American eagle tattoo, and he soon balanced this out with a Welsh dragon on the other. I remember that on his door he had a front page cutting from some US paper: ‘Ethel Merman Dead.’ One day I called on Brad. The floor and the bed and the desk in his room were completely covered in playing cards. Brad was seated, cross-legged on top of the wardrobe. He had about twenty fresh packs of cards beside him and he was tossing cards down onto the floor. There must have been thousands of cards in the room. I didn’t ask anything. ‘The patterns, man, the fucking patterns…’ he said, entranced.
This is for Brad. It’s a soundboard recording of R.E.M, live at Mansfield, MA- 15/9/89. I think it’s just the second half of the gig, but still 13 songs or so.