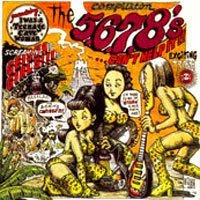 In 2002 The 5.6.7.8's enjoyed a belated 15 minutes of fame when their cover of the Rock a Teens song Woo Hoo made the UK top 30 following an appearance in Quentin Tarrantino’s Kill Bill Vol 1.
The band was formed in Tokyo in 1986 by sisters Ronnie and Sachiko. Throughout their career the band have drawn heavily on images from American popular culture from the 1950's .
This is riotous, high octane stuff that draws on garage rock and surf music, but it has a much rougher edge than the sound it is modeled on. The lyrics, whether in Japanese, English or phonetic approximations of English are often barely discernable, but the thunderous bass, frantic drumming and psychotic riffs are top drawer stuff.
Line up:
Yoshiko "Ronnie" Fujiyama- vocals, guitar
Fujii Sachiko - drums
Eddie - guitar
Omo-bass 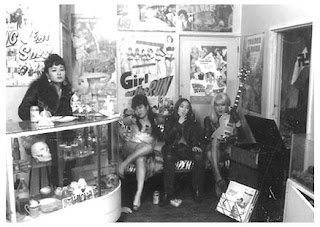