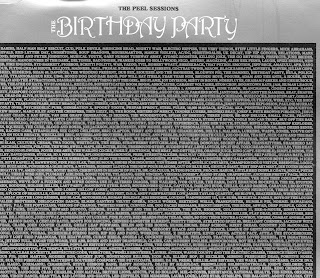 When I listen to the genius Nick Cave these days, his soulful piano, his reflective religiosity, (we’re not talking Grinderman here!) I pinch myself and think back to The Birthday Party. Mad bad and dangerous to know- 'Oops!, I've got blood on the end of my boot’.
Mayhem? Dark visions? Awestruck I wandered these dark plangent soundscapes. It was another world, and despite (or perhaps because of) the breezes of menace and seething swampy danger, it was good.
Cave said that the group was named from the birthday party scene in Crime and Punishment. Read it? There is no birthday party. it was a wake. Nick’s memory betrayed him, but it was an apt slip This is the second of four sessions that the boys recorded for Peel .