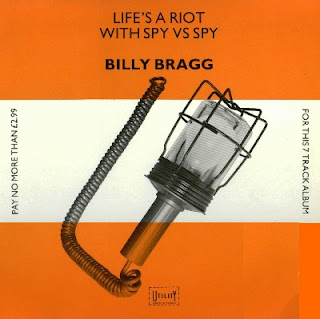 A man, a guitar and an amp.
What could be simpler?
Billy Bragg furthered punk’s original DIY ethos into the eighties. His debut was heralded as the return of the protest singer, was he the new Bob Dylan? Bragg’s acknowledgment to the folk/troubadour tradition of which he was seen as the heir came in his lifting the opening lines to his best known song, A New England ("I was 21 years when I wrote this song/I'm 22 now, but I won't be for long") directly from Paul Simon's song Leaves that are Green.
In the troubled times of Thatcher’s Britain (‘There is no such thing as society: there are individual men and women…’) Billy Bragg championed many worthy causes.
This was an unusual record; the original played at 45 rpm, featured seven songs and lasted for only 15 minutes and 57 seconds. However, rather than being classed as an EP it qualified for the UK albums chart and reached number 30 in January 1984, although sales fell significantly short of those of the number one at the time, Thriller, by Michael Jackson…
Consequently Bragg was unable to devote himself to an ever more eccentric regime of plastic surgery and narcissistic poppycock, and rather than investing millions in creating a bizarre fantasy world in which he was Peter Pan and Batman rolled into one, he went on to make several more solid albums and did a great deal to further the cause of socialism.
Posted by Walker