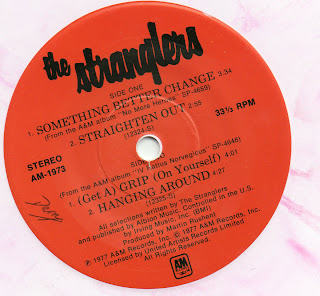 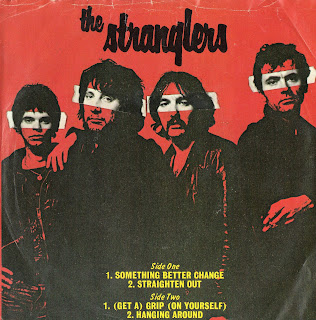 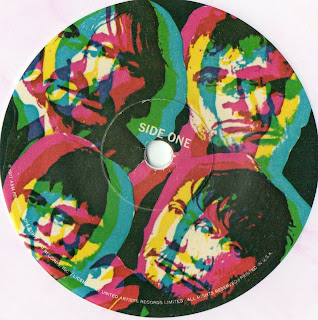 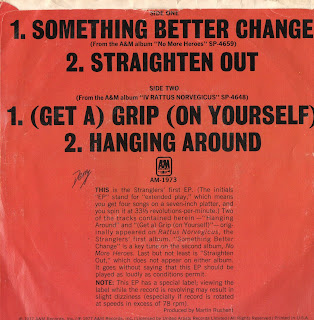 There was a time when The Stranglers were almost my favourite band.
What happened? Take the ingredients:
Misogyny, ephebophilia, de Sade, fasciphillia, homo-eroticism, Ozymandias, Triumph motorcycles, pornography, Nostradamus, vorarephilia, exegesis, conspiracy theories, Marx, grail theories, Mishima, Marcel Jean, Surrealism, bushido, ufology, …
That these preoccupations should lead, ultimately to the production of a bland Euro pop rhymes that were more reminiscent of casio keyboard effects rather than the pulsating psychedelic drive of their earlier works is the tragedy of The Stranglers.
Even when, from 1976 to 1979 they were a seriously good band they were victims of their time- never quite mainstream (bona fide troublemakers) but pushed to the margins of punk by their age and their old school attitudes (strippers on stage, songs about nubile girls).
Here are 4 relatively rare 7” records from their earlier days, when The Stranglers were:
Hugh Cornwell- guitar, vocals
JJ Burnel- bass, vocals
Dave Greenfield- keyboards, vocals
Jet Black- drums
1 Choosey Susie / Peasant in the Big Shitty (live) Original 10,000 copies free with IV Rattus Norvegicus LP in orange sleeve (1977). Choosey Susie is a strong number which would have held its own on either of the first two LP’s. It has the energy of punk but is musically more polished, pointing to the bands relationship with the pop combos of the sixties (think of their later covers: The Kinks, ? and the Mysterans).
As for Peasant, as the etching in the run out groove admits ‘what did you expect for nothing…’

2 White EP
Walk on By/Mean to Me/Tits
Original 75,000 copies with white vinyl 7" free with Black and White LP. (1978) It took me a couple of years to get my copy of this having taped the LP instead of buying it when it came out. It’s hard to believe that there really were 74,999 copies out there aside from the one that my mate had. Bacharach said that this version of Walk on By was the best he’d heard of any of his songs. Doorsish and accomplished, its a track which shows how close The Stranglers veered to true greatness, not just within the confines of the ‘new wave’, but in the broader context.
At less than 2 minutes long Mean to Me is a storming RnB number that reflects the pub rock origins of the band.
Tits is just a very long jam with a crass singalong chorus and Hugh Cornwell introducing the band in a parody of muso mentality.

3 Pink A& M promotional EP (USA) (1977)
An A&M freebie that showcases two tracks from Rattus (Hanging Around, Grip) and a preview of No More Heroes (Something Better Change), along with the non album track (Straighten Out). Four vintage Stranglers numbers.

4 EP free with IRS album ‘IV’ (USA) (1980)
A taster of just about everything (much like the album it accompanied)- tracks from Burnel and Cornwell’s 1979 solo projects ( Do the European and White Room), a token rarity (Choosey Suzie) and a single track (Straighten Out).

To me these records epitomised something about my personality during this era. They were rarities, I was a record collector, a fan, I didn’t just buy my records in Woolworths… even handling them now I find them strangely powerful as objects, stimulating as they do such extraordinarily vivid memories of my adolescence.
Think about leather bike jackets, black Doc Martens and enjoy. 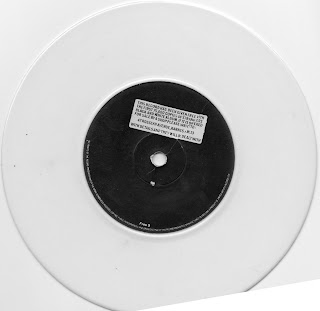 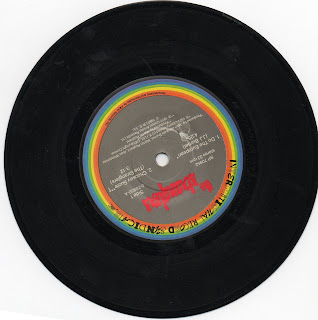