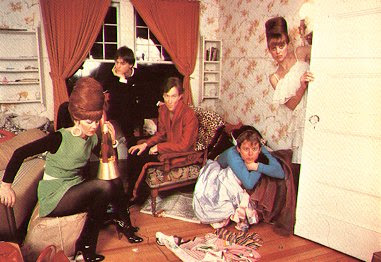 When I was a boy, living in the sort of naive haze induced by the soporific fumes of Airfix glue, I assumed that The B52’s must have taken their name from the bomber aircraft. In my addled adolescent mind their retro style conjured up images of those Sailor Jerry/ Memphis Belle type pin ups that were painted on the nose cones of Yankee planes.
But no. My mother told me. The B52 was also a hairdo. The sort of hairdo that those girls wore (or affected to wear, they were wigs, you know?)
Incidentally there was a time when I lusted after Cindy Wilson with every cell in my tormented body. If you’re reading this Cindy…ah, too late now.
These eight tracks were recorded live in the band’s hometown of Athens, Georgia, in 1978. The quality is fine. Oh, and Rock Lobster isn't on it.
Line up:
Cindy Wilson (vocals),
Ricky Wilson (guitar)
Kate Pierson (organ, vocals)
Keith Strickland (drummer)
Fred Schneider (cowbell, vocals)
Posted by Walker