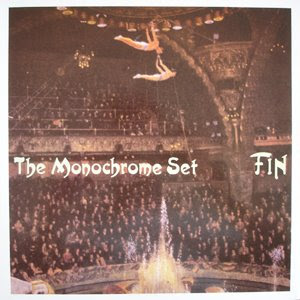 I must have been sleeping! My next post was going to be The Lost Weekend by The Monochrome Set- a classic from truly the most remarkable of the post punk art school type bands of the eighties. (I already regret that half arsed attempt to categorise them, but in my defence I plagiarized it from Cherry Red Records!) But when I was doing my homework I found out that this delightful LP had been rereleased on CD in February – so go out and buy it you lucky people.
In the meantime here’s Fin. This LP comprises live recordings from 1979-1985, including two tracks from a TV appearance on Eastern Eye. I had this on cassette and played it until it was little more than a distorted sub-aqua squeal.
The Monochrome Set were cool, they were clever, they were sexy, they were witty and I’ve never understood why they weren’t absolutely massive.
Posted by Walker