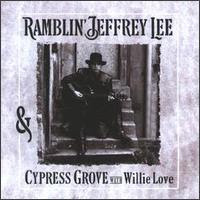 Here’s a blues album.
Ramblin' Jeffrey Lee, is of course,Jeffrey Lee Pierce (June 27 1958 - March 31 1996) frontman of one of the most exciting bands of the 1980's, The Gun Club, who churned out a haunting mix of blues and punk . If you like high octane music with a dark edge and you haven't heard their 1981 masterpiece Fire of Love, then get it today. If you can't find it anywhere let me know and i'll post it.
Go Tell The Mountain, Pierce's slim volume of autobiography and lyrics, is much sought after, often changing hands for £100 or more, so if you see it in the local Oxfam it's a good investment.
This 1992 LP features a couple of Pierce numbers and versions of songs by blues masters such as Howlin Wolf, Skip James and Son House.
I don’t know much about guitarist Cypress Grove except that he took his name from a Skip James number.Of the others i know even less.
Line up:
Ramblin'Jeffrey Lee - guitars & vocals
Cypress Grove - guitars
Willie Love - drums
Carl La Fong - acoustic bass, bass guitar
Kimberley S. - bluesharp
produced by Jeffrey Lee Pierce