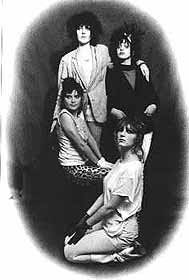 Mark Perry writing in And God Created Punk :
The Slits were loud brash bold and unrepentant... they never compromised their image or stance...they must have inspired loads of women to pick up a guitar and form a band....they were pure punk driven by female power...they shocked a lot of people, both on and off stage. They were dangerous, and their very presence threatened those that considered rock to be a male-only pursuit.


As a boy I was in awe of The Slits. There was definitely something scary about them. Of course, as a fourteen year old I thought that the cover of their LP Cut was absolutely brilliant. To tell you the truth I still 'appreciate the aesthetics of it' now. And it was a great record to boot.
This is the first session that the ladies recorded for John Peel. It was transmitted on 19th September 1977 and featured the original line up of: