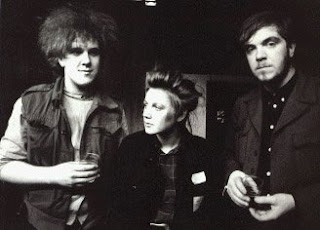 Cocteau Twins took the name of a song by fellow Scots Johnny and the Self-Abusers (who later renamed themselves Simple Minds).
I try and avoid cliché like the plague, so before writing on Cocteau Twins I drew up a list of words that I was going to studiously avoid: sensuous, atmospheric, layered, textured, complex, enigmatic, ethereal, dreamlike, lepidoptorous, jewelled, charming, crystalline, enchanting, hypnotic, filigree, opalescent, obscure…
The trio created soundscapes based around Guthrie's innovative use of distorted guitars, tape loops, and echo boxes butressed by Heggie's rhythmic bass and an insistent Roland 808 drum machine. And then there was Liz Fraser’s singing, often simplistically dismissed as nonsensical, exceptionally susceptible to mondegreens, at times reminiscent of some sacred Balkan chant.
Asked to explain the lyrics by Sounds Magazine- in 1983 Liz replied helpfully:
"It's impossible. It's impossible in as much as...No. You'd be disappointed if you found out...I might make it sound as if I think it's unimportant, but the words are important, important to me I mean, but...I think you're just supposed to get out of them what you can. And they DO make sense."
For those of you who are interesed in genres they were held to be the creators of Dreampop and were the quintessential 4AD group.
Line up:
Robin Guthrie -Guitar
Liz Fraser -Lead Vocals
Will Heggie -Bass