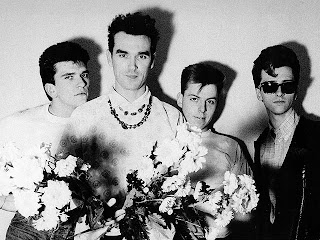 ‘We’ve done everything exactly right and it’ll show’ Morrissey told the Melody Maker, referring to The Smiths debut LP, provisionally titled The Hand That Rocks the Cradle, which they had just finished recording. The LP had been produced by Troy Tate, guitarist with The Teardrop Explodes.
Of course, it proved that this was not the case. Rough Trade were unhappy with the sound quality of the record, and brought in former Roxy Music producer John Porter to clean up the project.
I’ll come clean: The Hand That Rocks the Cradle and Accept Yourself are missing from this bootleg, and the quality is a bit warbling in places.
It is, however, an interesting listen for enthusiasts of one of the most influential bands of the post- punk era.
I’m not up to the task of writing much about The Smiths, but I would urge anyone with an interest in the group to read Simon Goddard’s remarkable The Smiths: Songs That Saved Your Life.
Posted by Walker