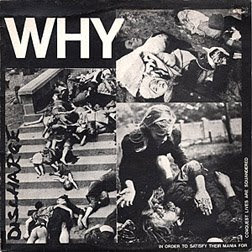 Stoke on Trent’s Discharge have had more line up changes than… well, they’ve had a lot of line up changes.
This is the real deal, hardcore punk at its best from the second wave. Sheet metal drumming, distorted atonal shredding and growling vox full of fury, anarchist and pacifist themes and apocalyptic angst. We were still very much aware that we were ‘living in the shadow of the bomb’… According to Ian Glasper’s Burning Britain: The History of UK Punk 1980-1984 (2004) 'Discharge's early work proved to be enormously influential, providing the blueprint for an entire subgenre. Their later work, however, was decried as bad heavy metal'.