The Apartments- The Evening Visits…and Stays for Years (1985) 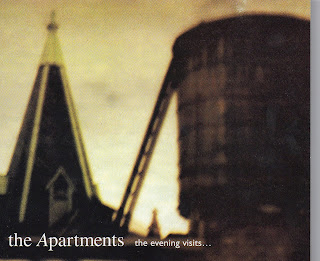 I first became aware of The Apartments when their beautiful song Mr Somewhere was covered by This Mortal Coil on 1991’s Blood.
The Apartments were formed in Brisbane in 1978, and have had a fractured career, splitting in 1979, reforming in 1984 and being sporadically active up to the present day. In fact the first twelve years of the band's existence yielded only 3 LPs. Peter Milton Walsh (singer, guitarist and songwriter) has been the constant throughout countless changes of personnel. Walsh himself was at one time, albeit briefly, in The Go Betweens.
Timeless, quirky and literate, The Apartments gained a cult following in France following the release of this LP. Amongst the numerous guest musicians who appear are Ben Watt (Everything But The Girl) and Graham Lee (The Triffids).
Line up:
Walsh- guitar, vocals