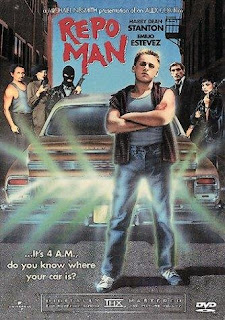 When asked what the movie was really about, Cox replied:
Nuclear War. Of course. What else could it be about? And the demented society that contemplated the possibility thereof. Repoing people's cars and hating alien ideologies were only the tip of the iceberg. The iceberg itself was the maniac culture which had elected so-called "leaders" named Reagan and Thatcher, who were prepared to sacrifice everything -- all life on earth -- to a gamble based on the longevity of the Soviet military, and the whims of their corporate masters. J. Frank Parnell - the fictitious inventor of the Neutron Bomb - was the central character for me. He sets the film in motion, on the road from Los Alamos, and, as portrayed by the late great actor, Fox Harris, is the centrepoint of the film.
In December 2008, a sequel was reported to be going into development with the working title Repo Chick.The film will be produced by David Lynch.The story will be set against the backdrop of the present economic downturn, and a boom in repossession that extends far beyond cars and homes. On 13 February 2009, Cox announced on his personal blog that shooting had finished and the sequel was now in post-production.