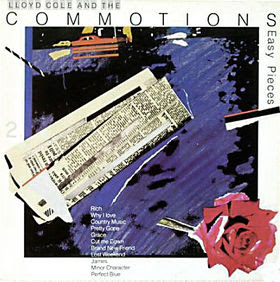 VINYL.
When I first met my ex-wife she was living in a very large apartment. The ceilings were high and the floorboards were bare. It was incredibly dusty; balls of dust gathered on the paint spattered floorboards and blurred the corners of the skirting boards. Where there were rugs they were discoloured, patterns muted by the dust.
The living room was so large that it looked like a stage set for a rehearsal. The furniture struggled to make an impression.
In one corner there was a record collection. About a hundred records, I guessed. An impressive if slightly dated hi-fi stood on a coffee table and the records stood directly on the floorboards under the coffee table. They stood in two ranks, front covers facing out into the room so that you could only tell what two of them were. I flicked through the records.
‘If you put them the other way, with the spines facing out, it would be easier to see what there was…’
‘Yeah, I know. But then they slip into the gaps between the floorboards…’
‘Yeah?’
I didn’t realise it on this first inspection. It was later on. A stone of disappointment winged my heart. I realised the record collection was not a record collection at all. Many of the sleeves were empty, or very dog-eared, spines worn away illegible to soft grey card, coffee cup rings on the fronts and backs. Many of the discs were badly scratched. There was something particularly sad about James Taylor’s voice under an avalanche of rhythmic abrasive sounds that eventually drowned him out as the stylus succumbed.
I gave up on finding even one undamaged record.
When I asked her about it she just shrugged. Going off on a tangent she said that she’d used to have a very valuable Rolling Stones collection, all originals, all in mint condition. A mutual friend, a heroin addict , had apparently stolen these records.
She didn’t really care about the remaining records. She never bought records any more, and as for the ones in the corner, well if there had been less space in the apartment she would have just thrown them out, left them in the back yard with the rubbish.
In 1985 a cassette saved my life- this was on one side. The other side was a Hatful of Hollow by The Smiths.
Line up:
Neil Clark – guitar
Lloyd Cole – vocals, guitar
Blair Cowan – keyboards
Lawrence Donegan – bass, guitar
Stephen Irvine – drums, tambourine
Jimmy Thomas, Jimmy Helms, Lance Ellington, Jimmy Chambers, Tony Jackson, Lynda Hayes – additional vocals
Derek MacKillop- is credited as a band member on Commotions Lp's- he was their manager but did not perform.

Labels: Lloyd Cole and the Commotions