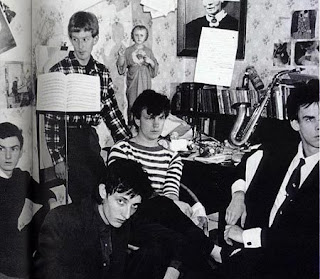 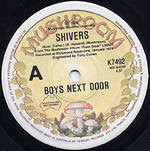 Nick Cave had knocked around Melbourne with a nebulous band since 1973. Mick Harvey and Phil Calvert had been with him since the outset- Tracy Pew appeared on the scene in 1975. By 1977 the band, by then known as The Boys Next Door, had abandoned their earlier models such as Roxy Music and Alex Harvey, in favour of a punkier sound. In 1978 guitarist Roland S Howard joined and the sound underwent a further significant change.
Shivers was written by Howard and released in Australia in 1979. (Their previous release, a cover of These Boots Were Made For Walking, was limited to 1,500 copies).
Its interesting to contrast these songs with the Hee Haw recordings (credited initially to The Boys Next Door and later to The Birthday Party), when they were beginning to adopt a more uncompromising approach to their work. I ripped these two tracks off the Door Door album in the interests of sound quality.
Line up:
Nick Cave- vocals
Mick Harvey- guitar
Tracy Pew- bass
Roland S Howard- guitar
Phil Calvert- drums