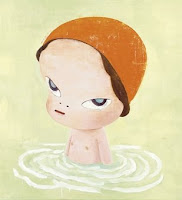 Walker says: In response to a comment on the Television Double Exposure post I went back to my sources and found that in my rush to post I had misread my notes- Double Exposure is a 1975 recording and does not feature Richard Hell, (although it was produced by Brian Eno and Richard Williams).
I've posted five Eno produced tracks now- and as they were recorded in 1974 , it is Richard Hell on bass.
Thanks to the anonymous reader who pointed out the error and apologies to those who were misled by it.
Enjoy the music and thanks for visiting.
Posted by Walker