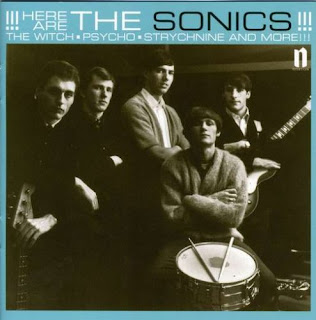 Conceived in 1964, released in 1965, but that’s enough about me…
If I was still as vibrant and energetic as this 1965 vintage I’d be more than happy. Seattle’s finest, a lo fi masterpiece recorded on two track. For those who love their genres it is the finest example of garage rock, and a precursor of punk, psychobilly and grunge (I prefer the catch all honest rock music). As Cub Koda writes on www.allmusic.com …the Sonics combined classic Northwest-area teen band raunch with early English band grit (particularly influenced by the Kinks), relentless rhythmic drive, and unabashed '50s-style blues shouting for a combination that still makes their brand of rock & roll perhaps the raunchiest ever captured on wax.