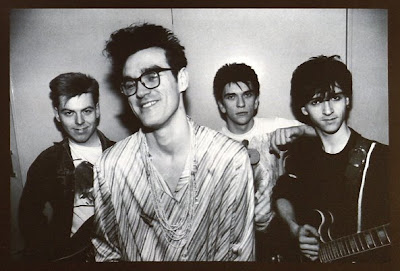 It's a pity you didn't sign the Smiths…
God to Tony Wilson, in the movie 24 Hour Party People.

Here's another film:
In 1982 Factory Records impresario Tony Wilson opened a nightclub in a disused Bollywood cinema . It was named The Hacienda (The name comes from a slogan of the radical group Situationist International: "The Hacienda Must Be Built", from Formulary for a New Urbanism by Ivan Chtcheglov)and given the Factory catalogue designation FAC 51.
This was The Smiths 14th gig, their 2nd at the Hacienda. To date they had only released one single. Two days previously Morrissey had given his first national radio interview on the David Jensen Show.
Press:
Smiths sign to independent label Rough Trade
The Smiths, generally considered one of the brightest prospects to emerge this year, have signed a long-term deal with Rough Trade Records. They say this "represents a conscious decision of preference" for the independent label, which was competing against three major labels, one of whom offered a six-figure cash advance. Their single 'Hand in Glove' has already been released, and they are currently in the studio with producer Troy Tate recording tracks for their first album and follow-up single.
New Musical Express, July 9, 1983 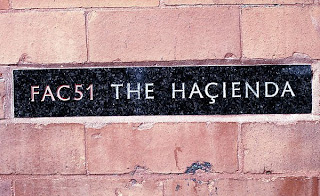 Why the importance in carrying flowers?
Morrisey: "They're symbolic for at least three reasons. We introduced them as an antidote to the Hacienda when we played there; it was so sterile and inhuman. We wanted some harmony with Nature. Also, to show some kind of optimism in Manchester which the flowers represent. Manchester is so semi-paralysed still, the paralysis just zips through the whole of Factory..."
Sounds, June 4, 1983
Line up for those born too late or just plain indifferent:
Morrissey- voice
Johnny Marr- guitar
Andy Rourke- the bass
Mike Joyce- drums