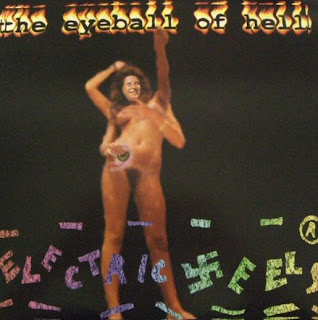 Whatever excesses of style and wilful provocation punk rock threw up, there is of course, nothing new under the sun.
Cleveland band electric eels had done it all in the 3 year career that spawned only 5 live shows and no record releases.
Do it yourself ethos? They saw a band that sucked and decided they could do better…
Anybody can be in a band? Certainly, none of the original line up were competent musicians…
Theatre, chaos, violence? electric eels performances had it all… they used lawnmowers and other machinery to enhance their sounds. The band would provoke fights which, in essence, became a part of the performance.
Outrage- they used swastikas and white power imagery as barriers between context (see: The swastika: constructing the symbol by Malcolm Quinn. Routledge. 1994) and started fights by pretending to be gay whilst dancing in blue collar bars.
Image? Dyed platinum blonde hair and thrift store cross dressing a la New York Dolls.

Despite splitting in 1975 electric eels made their debut on vinyl in 1978.
This album, released in 2001, compiles recordings made April- September 1975. For a couple of the later tracks the band had evolved into The Men From Uncle and undergone some line up changes. See Discogs for details. 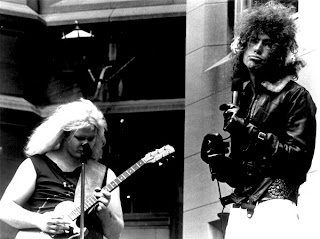