Just for fun-
Nothing new here, and no doubt if you're a serious music lover of a certain age then you'll have (or have had) these tracks already, or at least know them.
Introduced in 1976, John Peel’s Festive Fifty (aired in the build up to Xmas) became an institution.

Originally listeners chose their all-time favourite three tracks, but this was replaced by a year-only chart in 1982. 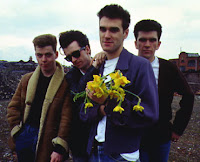 By 1986 Peel was already expressing disillusionment at the predictable and unadventurous choices of his listeners, and he was quoted as saying that he felt there were too many white boys with guitars making an appearance on the countdown.

This culminated in the ‘Phantom Fifty’ of 1991, which was not actually aired until 1993. Peel was hacked off for two reasons- the absence of music that he had been championing in 91 (rave, hardcore) and the inevitability that Smells Like Teen Spirit would be number one by a country mile.
Here then are the number ones from the golden years…a cracking little compilation for the car or the pod or for teaching the children about the old days.
pics: Sex Pistols, Joy Division, New Order, The Smiths, The Jesus and Mary Chain, The Sugarcubes, The House of Love, The Sundays, The Fall.