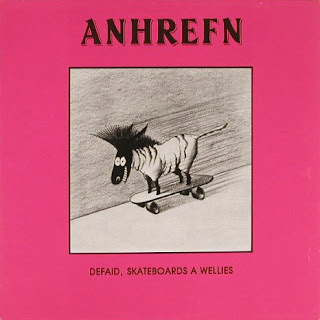 To us singing in Welsh is totally natural. We don't think twice about it... It'd be a pretty boring world if everybody sang with American accents or whatever.
-Rhys Mwyn
Up until the early eighties Welsh language music was a narrow and incestuous scene- then along came Bangor-based punk band Yr Anhrefn (The Disorder). They provided a catalyst for the development of more relevant and meaningful Welsh language music (when the language itself was enjoying something of a revival) and also took Welsh language music to a wider audience outside the confines of the North Western corner of the principality, the hotbed of nationalism.
Anhrefn were first Welsh language band to receive any kind of mainstream attention, and the first to sign to an international recording company (Worker’s Playtime, a subsidiary of Alternative Tentacles). They also played 3 sessions for John Peel (coming soon!)
In 1983 Rhys Mwyn established the Recordiau Anhrefn label which is still active today.
Based in a small mid-Wales village the label provided a subversive alternative to the ultra-conservative Welsh music scene of the time. According to the BBC Wales music website its independent and outward looking approach contrasted drastically with the establishment's isolated entrenchment and brought Welsh language music to corners of the world that had no previous knowledge of its existence, providing a foundation for the Welsh music boom of the mid 90s. Bands such as Catatonia, The Super Furry Animals and Gorki’s Zygotic Mwnci had their roots in the Welsh language scene.
This is their first LP, Defaid, Skateboards a Wellies (for those of you not familiar with yr Hen Iaith, Defaid= sheep)