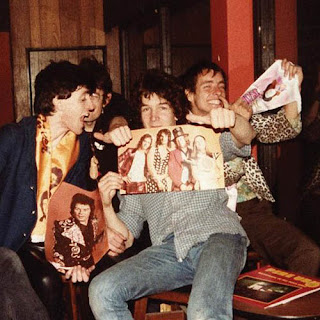 My mother always had the radio on. I’d hear her go downstairs in the morning and on it went, first thing she did. Consequently my earliest musical memories are of the popular tunes that wafted from that old Alba transistor- Dave Dee, Nancy Sinatra, The Beatles etc. Then, in my childhood, being exposed to a lot of older kids, I soon got to know about groups like the Who and Slade, along with the glam rock, Roxy Music and poppier seventies fare. Then, following an obligatory young teen eclecticism that embraced ELO, Queen and 10cc among others (thankfully including Bowie, early rock n roll and Johnny Cash!), my musical tastes drifted towards punk and ‘alternative’. Strange as it might seem after 40 odd years of almost continuous exposure to music I can name my favourite single without hesitation:
Read About Seymour by Swell Maps.
I’m not going to pretend for one minute that I got into it as a 12 year old. It was already a classic when I first heard it about 4 years later.
Read About Seymour is much anthologised- so here’s a different version of it from Swell Maps Peel session of October 16th 1978, performed by: