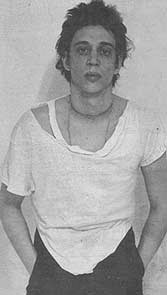 Richard Hell was a definite 100% inspiration... torn and ripped t-shirt...this look, this image of the guy, this spiky hair...By being inspired by it I was going to imitate it and transform it into something more English - Malcolm McLaren
On December 10th 1976 John Peel’s BBC radio show was given over to a punk rock special. It featured The Damned in session, and tracks from The Sex Pistols, The Saints and a host of American groups who had influenced the development of punk, such as The Ramones, Television and Pere Ubu, along with earlier garage acts such as The Seeds.
This version of Blank Generation comes from the EP released by Stiff records.
I have a good remastered copy of the whole show. I’ll post it if anyone’s interested.