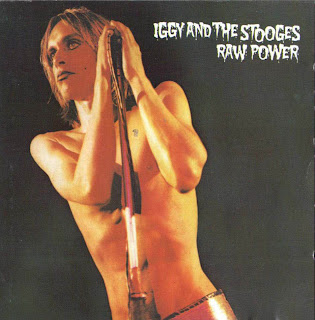 Everything's still in the red, it's a very violent mix. The bottom line is that this is a wonderful album but it's always sounded fragile and rickety, and that band was not fragile and not rickety. That band could kill any band at the time and frankly can just kill any of the bands that built on this work since, just eat any of those poodles—Iggy Pop
John Peel described this as possibly the most uncompromising LP you will ever hear…
Jon Savage wrote in England's Dreaming …if you only hear two punk records make it Never Mind The Bollocks and this one…
The Stooges, fronted by the guy from the insurance advert, were ahead of their time, and their three studio albums are obvious precursors of punk, heavy metal and grunge.
Iggy made a hash of producing the LP, and Bowie was brought in to remix it. Consequently many fans and critics felt the record lacked edge and depth, and debates still rage over the relative qualities of the original Bowie mix and Iggy’s 1997 remaster (he’d learned a bit by then!), of which this is a copy. As with many works later deemed classics it was a commercial failure.
Of course, by the time the British punks got to actually see Iggy he had moved on. The Stooges were gone and he had been hanging out in Berlin with Bowie, who was now producing and playing keyboards. The records that the now clean living Iggy made when punk was at its height, whilst being great, were not punk, whereas his earlier works, this included, most definitely were.

Labels: Iggy and the Stooges, Iggy Pop, The Stooges