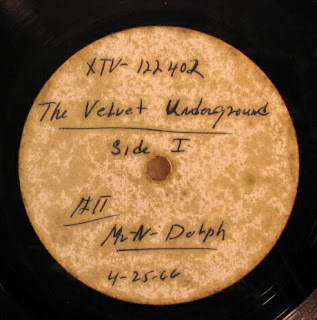 It’s April 1966 and at the Sceptre Studios The Velvet Underground are working on what will be the most influential record in the history of rock music. On 25th April a rough version of 9 of the albums’ 11 eventual tracks was committed to acetate. Each track is either a different mix or a different version of the completed work. It turns up in a New York flea market in 2002. The story goes that it was bought for 75cents. It later sold on e bay for $ 25,000… I didn't win it.
If you are familiar with the album this is a refreshing change. Obviously there’s a lot of surface noise but some of my vinyl copies of The Velvet Underground and Nico became equally crackly through overplay.
If you don’t know the album I suggest you buy it as soon as possible.