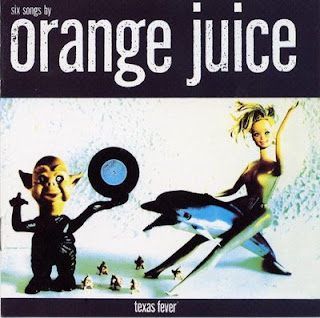 Happy days at Burning Aquarium- this is our first post in response to a reader request. Keep them coming and we’ll do our best to fulfil your requirements.
Last month’s post of Postcard era Orange Juice singles has proved hugely popular.
3 years on and in many respects Orange Juice were a very different band, with Two UK top 40 LP’s and a top ten single under their belts. Great as their work for Postcard was, Orange Juice were by now more musically polished , and the use of more sophisticated production saw the band revealing their soulful side. The first five tracks on this mini LP were produced by Dennis Bovell, a reggae producer who had earlier made forays into punk with The Slits and also produced The Pop Group.
Line up:
Edwyn Collins – guitar, vocals
Malcolm Ross – guitar, vocals, keyboards
David McClymont – bass guitar, keyboards
Zeke Manyika – drums, vocals, percussion