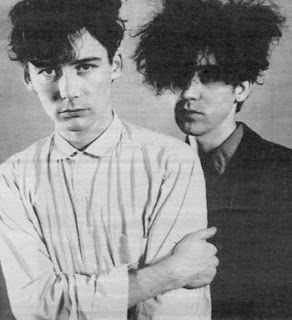 The Reid brothers had long harboured dreams of forming a band. A combination of sixties pop harmonies buried in an unrelenting storm of feedback and distortion. The guitar was detuned, or rather just left untuned. The bass had three strings in 84, two in 85 ...they’re the two I use, I mean what's the fucking point spending money on another two? Two is enough…explained the bass player. The drummer went on to front Primal Scream. Late in 84 the NME described them as the best band in the world. Their gigs were contemptuously brief and ended in chaos. Fucking brilliant!
Line up:
Jim Reid (Vocals)
William Reid (Guitar)
Douglas Hart (Bass)
Bobby Gillespie (Drums)