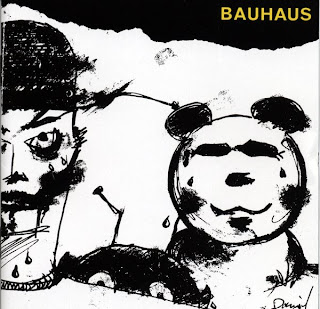 I think that it was Abbo of U.K Decay who first described his music as ‘gothic’, but the ultimate Gothic (the ‘ic’ disappeared sometime later) band were Bauhaus. From the protracted dirge of their nine minute debut Bela Lugosi’s Dead, they were all about the staples of gothic imagery. Strangely, given that the ethos of the school of art and design from which they took their name was that ‘form should follow function’ Bauhaus were very much about style. Not that the music lacked substance- the sinister rhythms and menacing bass were the perfect backdrop for Peter Murphy’s handsome theatrics.
This is their second album, and since I first set eyes on it I’ve felt that it’s worth having for the cover alone.

In our local rugby club there were sweaty Friday night discos- most of the Farrah slacked clientele were stylistically sealed in about 1976, Avon embalmed polyester relics of the Marshall Ward Catalogue. I can almost smell the Brut. I remember that I was leaning against the wall just waiting to get punched in the face when my cousin came up to me and shouted in my ear that one of his mates had brought Kick In The Eye with him and that they had coerced the DJ into playing it. After much anticipation and a gradual increase in the pressure being applied the DJ finally played the record. It was the funkiest thing that they’d ever hear, but nobody danced… and the DJ called them Boo- Hoose.