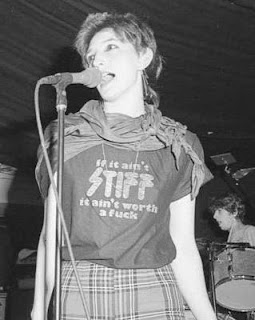 Delta 5 were one of those delightfully militant bands that sprung up in the late seventies (cf Au Pairs). They had a funky two bass sound that was reminiscent of fellow Leeds band The Gang of Four. (If I keep on mentioning The Gang of Four, soon I’ll have to dig something out for a Gang of Four post…). Following a couple of well received singles and a successful US tour Delta 5 left Rough Trade and signed to a major (Chiswick). So far so good… then their debut LP, See the Whirl (1981), which suffered from production that was unsympathetic to the immediacy of their earlier records, was a critical and commercial failure. This led to the band breaking up.
This is a session transmitted on the John Peel Show, 11th February 1980.
Line up:
Bethan Peters -bass, vocals
Ros Allen -bass, vocals
Alan Riggs -guitar
Kelvin Knight -drums
Julz Sale -vocals