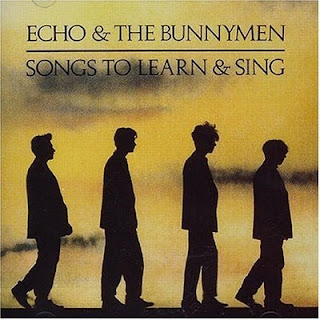 I only ever wanted, since the age of 13, to be the best singer of the best band in the world- Ian McCulloch Spin magazine interview, 2008.


This compilation brought together the band’s ten singles to date and introduced the previously unreleased Bring on the Dancing Horses.
Ian McCulloch described the 1984 album Ocean Rain as the greatest album ever made, and compared the first three Bunnymen LPs to the Mona Lisa, Van Gogh's Sunflowers, and The Garden of Earthly Delights by Hieronymus Bosch. Imagine a collage made up of elements from these three great paintings- not necessarily a pleasing picture in itself…just as a compilation such as Songs to Learn & Sing could have proved very unsatisfactory. But there isn’t a single minute of weakness here- a perfect introduction to the Bunnymen’s strangely poetic oeuvre.
I bought the 7” of The Cutter on the day that I had my interview for Art college, and at the campus I saw an awful lot of boys who looked just a little like small town Bunnymen.
Incidentally, if Echo really was the drum machine, replaced in 1979 by real drums and a real drummer, isn't it touching that they keep the name to this day?
Bunnymen:
Ian McCulloch – vocals
Will Sergeant – guitar
Les Pattinson – bass
Pete de Freitas – drums

Labels: Echo and the Bunnymen