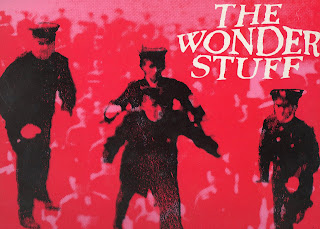 Black Country rock…
And this does rock.
In the late eighties independent music began to celebrate its poppiness, and bands began to acknowledge the influence of the most archetypal pop groups from the past, such as The Beatles. There was also certain nostalgia for the sort of rock bands that anyone with punk sensibilities would previously have disdained, a bit of a crusty old rock revival coupled with a sartorial hippiness … The Wonder Stuff were somewhere in between the two.
For anthropologists of rock movements, fads, genres etc, the music press invented a ‘scene’ in which to pigeonhole a loose collection of Midlands bands who typified these trends,: grebo
- a term I’d totally forgotten about until I was looking up some info for this piece…
The Wonder Stuff briefly transcended this and became, as well as student union staples, a pop group who had hit records and had their posters blu tacked to the bedroom walls of schoolgirls.
This, their first LP, is full of catchy tunes and it bounces along at a rate that makes staring at one’s shoes impossible - but there is also a hard edge to the music which hasn’t drifted too far from its simple origins.