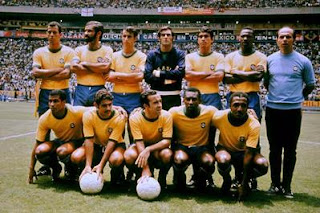 Egypt has the pyramids, Greece the Acropolis, France the Eiffel tower, Russia St Basil’s, and Brazil has the Statue Of Christ the Redeemer…and yellow jerseys (green trim), blue shorts (white trim), white socks…
Instantly recognisable symbols of a nation, a culture are surprisingly few and far between (I’m prepared for refutations here, so post away…)
In the fateful final, the Maracanazo of July 1950 Brazil wore white. Famously they needed only a draw to secure the world title when, in front of almost 200,000 supporters, they lost two one to their neighbours Uruguay, a defeat which almost 60 years and five world titles later, is etched on the national psyche.
After the defeat it was decided the colours had to change. They weren’t patriotic enough.
In 1951 the Correio da Manhã newspaper held a competition to design a kit incorporating the four colours of the Brazilian flag. From the 301 entries the design of nineteen year old newspaper illustrator Aldyr Garcia Schlee from Pelotas was chosen . The new kit of yellow shirt with green trim and blue shorts echoed the design of the Brazilian flag perfectly. First worn in March 1954 against Chile it has remained largely unchanged ever since. 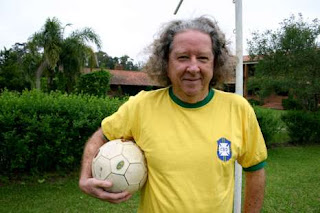 Following his success Aldyr moved to Rio, where he was given lodgings with the national squad, but he hated it. He described the footballers as 'scoundrels, drunks and philanderers'. Aldyr soon returned home, where he became a successful journalist , academic and writer. His short stories (he writes in Spanish rather than Portuguese) have won many accolades.
Following the military coup in 1964 Aldyr was imprisoned three times and expelled from his teaching job for 'philo-communist activities'. He had to abandon plans for a career in the diplomatic service and was banned from leaving the country. In 1965, on the day he was due to hand in his doctoral thesis on 'national self-determination', an army truck was waiting at the university door and all copies were impounded. The work was suppressed until 1977, delaying his doctorate by 12 years.
Aldyr grew up in a town that is on the border with Uruguay. His literary work is primarily concerned with Uruguay and he is now a Uruguay supporter. 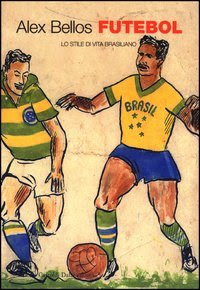 Aldyr's original drawing, featured on the cover of Bellos' book.


See Alex Bellos’ marvellous book ‘Futebol’ for more on Aldyr and the impact of football on the culture and national identity of Brazil.
Posted by Walker