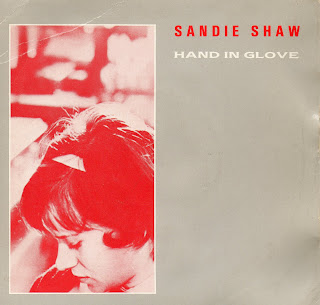 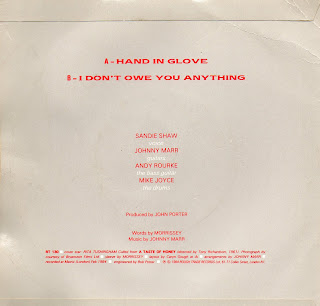 Morrissey was always a huge fan of the female pop stars of the 1960’s, and Sandie Shaw in particular.
In 1984, having being coaxed out of semi- retirement by Morrissey, Sandie recorded a cover of The Smiths debut single Hand In Glove backed by Johnny, Andy and Mike. The record sold 20,000 copies within three days of release.
Also included here are Jeane (which appeared on the 12”- this version is a bonus track on the 2004 issue of her LP Hello Angel) and a duet by Morrissey and Sandie of Please Help The Cause Against Loneliness- an outtake from Morrissey’s Viva Hate LP. The song was written by Morrissey for Sandie and her version appeared on Hello Angel (the title of which came from a postcard that Morrissey sent her).
Here are some of Sandie’s reminiscences about working with The Smiths.