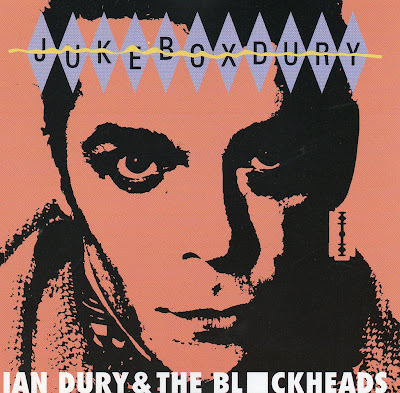 That guy sounds like he has a tongue disease- Lou Reed
Funny, I remember buying this on vinyl but I also remember the last time that I saw my vinyl copy!
In the summer of 1991 my old friend R was living in a remote farmhouse overlooking Carmarthen Bay. He had a party one Saturday- I can’t remember what the occasion was, if indeed there was one. In the week leading up to the party he specifically asked me if I had any Ian Dury that I could ‘lend’ him. Torn between a realisation that the ‘loan’ would probably be very extended and the desire to please him, I chose this LP rather than any of the ‘proper’ studio albums. After all, it had only cost about three quid and it was getting a bit scratchy.
By mid afternoon on the day of the party the guests were already outnumbering the population of the nearby village. We arrived from all points and gathered in one of the two tiny pubs on the village square. I remember one of my mates as if it was yesterday- He had flip up shades and a bollocks to the poll tax t shirt, on the seat next to him in the pub was a stack of Happy Mondays, Stone Roses and Inspiral Carpets records- no bag.
I asked him how he’d got there- he’d missed the train and walked eight miles, along the railway line! Then he’d cut across the fields to the village. ‘My fucking feet are killing me’- he was wearing flip flops.
I don’t remember much after that- smoking in the garden and watching the string of lights as miles below a train edged around the rim of the coastline.
And my Ian Dury LP, in its worn but still lurid sleeve, leaning by the hi fi.

This is a best of compilation of Ian’s Stiff Recordings.