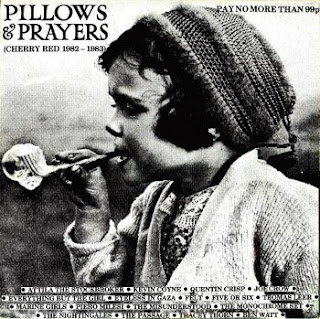 Cherry Red Records was always about musical individuality, diversity, character, commitment and passion... Ian McNay.
Cherry Red started of as one of the many D-I-Y punk labels, but by the early 1980’s founder Ian McNay felt that the independent music scene was becoming narrow, with labels such as Factory being a brand which precluded certain acts from being taken on board. Mc Nay believed that what he termed ‘light music’ had a place in the independent scene, and signed artists that did not adhere to the limitations of the post punk scene at the time. In doing so the label
helped define a new aesthetic in independent music.


This LP cost 99 pence. I seem to remember that a pint of lager was about 50 pence in 1982, but that might be completely wrong.
Still makes me think of cider from plastic bottles, the smell of hairspay and worn black denim and Antigone by Jean Anouilh.
Featured acts: