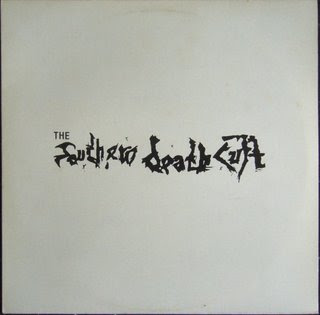 Bradford, 1981: 19 year old punk Ian Lindsay walked in on a band rehearsing in the basement of the house he’d just moved into. He joined the group on vocals. 21 years later he was fronting The Doors…
Ripped from cherished vinyl.
As it says on the sleeve: Southern Death Cult disbanded before recording their first album, this LP has been complied by them from existing session and live material and alternate recordings.
Tracks 1 & 3 recorded 21 May 1982 for the John Peel show First broadcast on 10 June 1982.
Tracks 2& 10 recorded at The Playground (studio).
Tracks 4 & 9 recorded 20 January 1983 for the David Jensen show on BBC Radio One. First broadcast on 24 January 1983.
Track 5 recorded at Manchester Square (studio).
Tracks 6, 7 & 8 recorded live at Rafters, Manchester, on 13 December 1982.