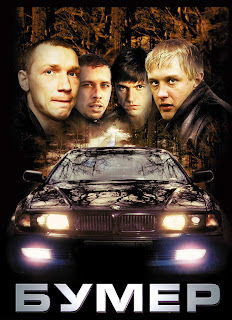 Бумер (Boomer) is an award winning 2003 Russian film directed by Peter Buslov. Four crooks go on the run, a road trip taken in the stolen BMW (Бумер) of the title.
It depicts the lost generation of the Yeltsin era economic crisis as Russia came to terms with capitalism and the 'free market'.
Blurb: Corrupt cops, street gangs, "Bratki" , angry truck drivers, beautiful women and death are what four friends in a black boomer who go on a mission from one region of Russia to another are about to face in the wasteland of small-town Russia.
The soundtrack features 8 tracks by Sergei Shnurov (Сергей Шнуров) aka Shnur, of the band Leningrad.