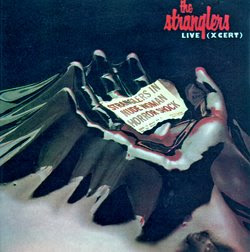 Another of those LPs from my adolescence that brings back the taste of warm beer.
The tracks were recorded at The Roundhouse in June and November 1977 and at Battersea Park in September 1978. It was the band's fourth album release and their fourth consecutive top ten album in the UK.
For younger readers: The X certificate , replaced by the 18 certificate, was a film classification that from 1970 to 1982 meant suitable for those aged 18 and over.
Proper Stranglers line up, proper Stranglers record. 1979 saw the release of The Raven and the beginning of their slide into loopiness.
In the interest of continuity I haven't split the tracks up.