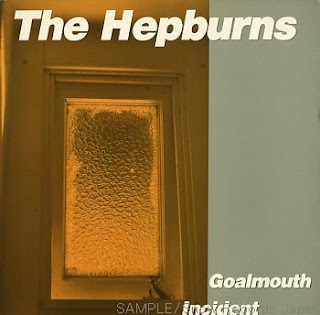 I first heard this record in one of those high ceilinged Victorian mental hospital wards. I was working with Matt Jones’ brother Jim and the day he received his copies of the record he was putting on a disco for the patients. The usual Tom Jones and Showaddywaddy fare was interspaced with numbers from The Smiths and tracks off this EP.
The Hepburns come from Llanelli and I knew the four guys who played on this, their first outing on vinyl.
Now, 22 years later ( no idea what happened to my 1987 copy) I’ve just managed to get hold of a copy from Japan.
The Hepburns (with Matt Jones and Mike Thomas from the original line up) are still going strong, and, much as I urged people to buy this EP 22 years ago, I would urge you to support them by picking up what you can of their more readily available releases from Radio Khartoum , where you can also find a free download of a recording of the tracks from their 1989 Peel Session.

UPDATE- 23.07.09- I've been alerted to quality problems with this transfer. I'm working to fix these problems and as soon as I have managed this I will I re up this record . Until then be warned that the sound quality is poor. I'll let you all know when this is fixed and apologies to any readers who have been disappointed by this.

UPDATE- 24.07.09- The problem is now resolved ( input levels were too high, causing distortion if you're interested in such things). The new link should be up by 12:00 BST tomorrow. Thanks pop pickers.