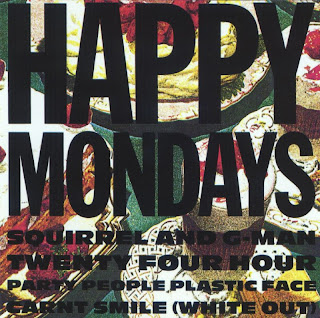 This, the Happy Mondays first LP is often overlooked. Some critics have described it as a false start. Shaun Ryder once said that the band were, at the time, modelling their sound on The Doors, making ‘music with gaps’, but he could have been having a laugh. The great John Cale produced. There is a tremendous energy and drive to the songs, and the bass is prominent and funky.
Initial copies of the album included the track Desmond, a re working of The Beatles’ Obla di, and legal action from the owners of that song’s copyright (namely Michael Jackson, proving what a cunt he was) forced the album’s withdrawal. Personally I’ve always thought of Desmond as one of the bands weaker tracks, and it was replaced by 24 Hour Party People- cheers Michael!

Here we have a CD rip:

And here is Desmond, ripped from the original vinyl album: