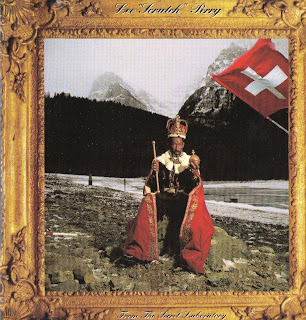 The yellow sticker on the case tells me that I paid $29.95 for this disc in The Sound Tunnel- that would have been Cairns, Queensland early 1997.
Judging by the cover it looks like the mighty Scratch has dubbed himself king of his adopted Switzerland.
A truly great record on which Mr Perry is backed by Dub Syndicate and Roots Radics, and shares the production credits with Adrian Sherwood.